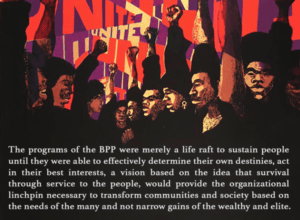 American society is still a class society, divided by racial, ethnic, ideological/political and omnipresent  economic barriers. Those particular obstacles occupy the social space that keeps individuals, groups of people, neighborhoods and other geopolitical territories from reaching common ground in a united effort that seeks to  satisfy and attend to the needs of the masses of people. While the “middle class” is touted as the backbone of this society, that statement overlooks and ignores the unemployed and “unemployables” and, the working people who do not live the life of conspicuous leisure. The struggles against American racism and the accompanying historical discrimination, bigotry and bias embedded in institutions, have driven the oppression and disenfranchisement of Black and poor people, domestically in particular and internationally in general.

The Black Panther Party (BPP) was a visionary organization that educated, organized and mobilized Black and  poor communities in the wake of on-going government  attacks on the rights of Black and poor people. With its 10-point Program and Platform as a guide, free community programs were established across the country, that addressed some of the immediate needs and interests of Black people. Those programs addressed the hungry, those who needed health care, exposed housing discrimination, provided clothing, provided access legal services and  decent and relevant education, as well as  broadened Black  participation in the political arenas.  The BPP formed coalitions with other poor communities in an effort to identify the common forms of oppression that existed throughout the urban cities  where the needs of and the threats to people were many, and the services provided were few or non-existent.

A common point in the beliefs and actions of the BPP was to bring programs, projects and problem-oriented activities to the masses of people which would lead to viable institutional development that created community-based empowerment and real self-determination. The programs of the BPP were merely a life raft to sustain people until they were able to effectively determine their own destinies, act in their best interests, a vision based on the idea that survival through service to the people, would provide the organizational linchpin necessary to transform communities and society based on the needs of the many and not narrow gains of the wealthy and elite.

The social and political dynamics of the Civil Rights and Black Liberation Era have expanded into the feminist/women’s movement, gay rights and other social movements that are intended to empower groups of people who had previously been treated with officially sanctioned indifference and various levels of perceptible and imperceptible oppression. These awakened and engaged groups of people are challenging the historical and systemic ideas of  a white male dominated society that concedes to the civil and human rights demands of  people only in the face of determined and protracted challenge.

The Black Panther Party recognized that the true power of the people was the ability to identify and define phenomenon and make it act in a desired manner. To that end, The BPP observed and acted based on the understanding of the community in order to raise their consciousness to a level where they would act to create and survive in the face of oppressive behaviors. The immediate issues and concerns of the community were the springboard for programs which filled the social vacuums left untouched and overlooked by city, state and national agencies.

Groups, committees, organizations today must develop a concrete vision or programs that outline their objectives and the general needs that they intend to address. Those objectives should arise from the real and valid concerns of the community as they are directly tied to the degree that the powers that be have failed to neutralize and correct the blatant disregard for the well-being of the majority of its people. Any of the movements which arise today must have a committed cadre and network of people who are able to articulate organizational ideas and act,  as they are interconnected to the problems and concerns of the people in whom they are interested in educating, organizing, mobilizing, and offering viable solutions to.

Such organizations provide leadership and pathways at the grass-roots and com-munity levels with and through people who may not have the vested interest in the daily social dynamic, or who have been unable to bring the dominant powers to act to insure the life, liberty and pursuit of happiness as promised in its documents.  The new socially and politically motivated groups and movements must be flexible in their approaches, yet implacable in their determination if they are to be taken seriously by te community they intervene with and the forces whose attention they hope to attract. Individuals must be willing and able to immerse themselves in the   visions of their group or movement such that the individual and the whole act as one whole, presenting a united face. As the social issues and problems which existed before still flourish today, even though softened by new political rhetoric and social acceptance, without a standing body of people to press forward on a protracted level, to expose, challenge and act against the failures of  the American promissory note of freedom and justice, the needs of the many will be suffocated by the wants of the few. In a well-ordered society, one that addresses the needs of its’ people, people need not need.