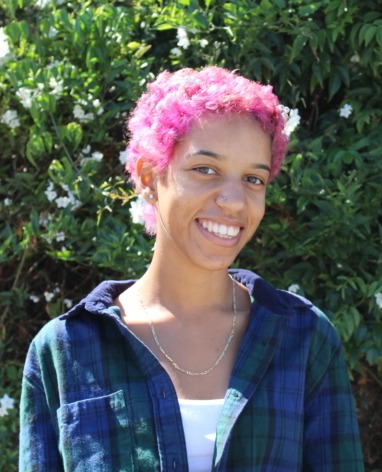 Indigo is a founding BOP member from Oakland and has been a part of the organization since the age of nine.  She was first introduced to the organization along with her father — who is also a founding member and has been committed to the organizing and the work ever since.  From an early age, Indigo had been passionate about her community and how she can help make effective change. Growing up in the bay and going to high school in Clayton Valley ( considered a Bay area suburb)– she feels that she can easily relate to youth and community members who grow up in different cities across the Bay, that have to adapt to the varying cultures.

She is strongly influenced by her Black and Brown upbringing where she intends to use her own lived experience as a way to relate and share perspectives. In 2018, she participated in Center For Third World Organizing’s (CTWO’s) Movement Activist Apprenticeship Program (MAAP) where she spent time in New York and Miami ,and  was able to add valuable lessons and experiences to her organizing tool belt. She is currently a sophomore at Mills College in Oakland, where she is majoring in Ethnic Studies and minoring in Urban Education.She enjoys skateboarding with her dad and changing her hair and nails to match her mood on her time off.